The solar industry is a rapidly growing industry. Ever-changing legislation, utility protocols, and technologies make this industry hard to investigate as a prospective customer. This page aims to provide you with an unbiased and accurate breakdown of how solar works here in California and why solar is a good choice for you. This page is kept up to date with the latest, most pertinent information that should affect your outlook on the solar industry as a home or business owner in California. GoSimpleSolar hopes this page will empower you to make informed decisions regarding solar!

How Solar Works with PG&E – Net Metering; protected by California Law until the year 2037

The Net Energy Metering (NEM) program offered by PG&E is the backbone of the case for solar in California. The video below will provide you with a concise breakdown of PG&E’s NEM program.

Chances are that if you are a residential PG&E customer without solar, you are signed up for the E1 Tiered Electric Rate. Under this rate schedule, you pay more for your electricity as your electric consumption increases. The E1 rate is being discontinued by PGE in the near future. Virtually all residential customers will be forced to a Time of Use rate. See E1 details below.

Most solar PV systems provide the best financial returns when you transition to a Time-of-Use rate structure such as the ETOU-C or ETOU-D rates offered by PG&E. Under these rate schedules, the electricity production from your solar array is optimized for the best financial returns that solar has to offer. During peak energy periods (ETOU-C: 4PM-9PM everyday, ETOU-D: 5PM-8PM weekdays) the cost of the electricity that is generated by the power plant is at its highest. By limiting your usage during this timeframe, as well as offsetting what you DO use with solar electricity, you may cut your electricity cost substantially. This works because the excess energy generated by your solar array is sent back to the grid and credited back to you at the exact rate that is charged during the respective time of export. 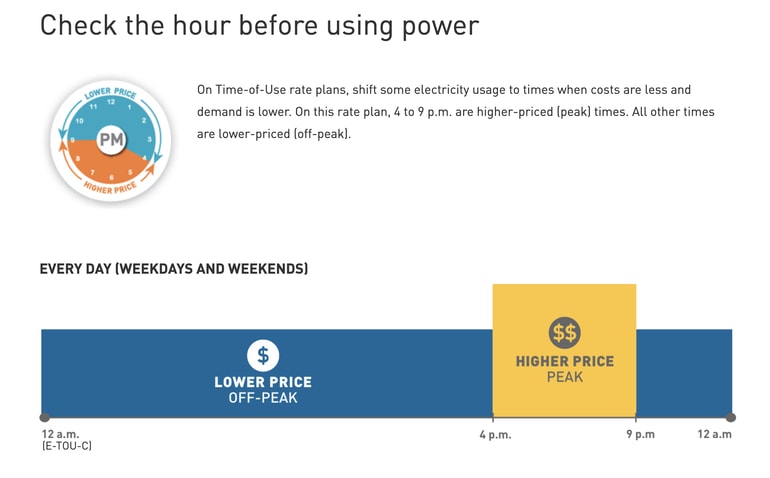 The E-TOU-C rate is aimed at high electricity users that can reduce their usage during the peak time of 4pm to 9pm everyday. Any user that can keep their daily electricity usage under 9.4 kWh (applies to PG&E Territory X), would benefit from the E-TOU-C’s low baseline cost of $0.116/kWh. However, any user that goes beyond 9.4kWh on a daily basis will pay a steep increase for the electricity during this period of usage. By shifting electricity usage outside of peak hours, all Time-of-Use ratepayers benefit from the lower off peak cost of electricity. For some low to mid-usage solar owners, this rate has the potential to be optimal. 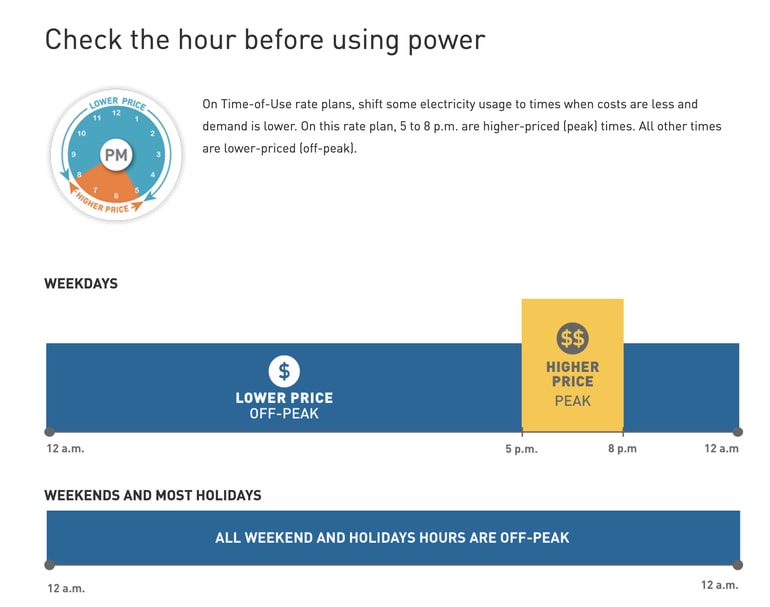 The E-TOU-D rate is aimed at high electricity users that can reduce their usage during the peak time of 5pm to 8pm on weekdays. Unlike the E-TOU-C rate, the E-TOU-D rate does not sport a baseline electricity usage that is charged at a low fixed rate. All off-peak and peak usage is charged at a fixed rate. By shifting electricity usage outside of peak hours, all Time-of-Use ratepayers benefit from the lower off peak cost of electricity. By exporting all of the energy generated by the solar system to the grid during peak hours, a user will be credited at the high peak rate, which will offset a higher amount of off-peak usage. Essentially, 1kWh exported during peak hours buys you 1.1-4kWh of off-peak usage. 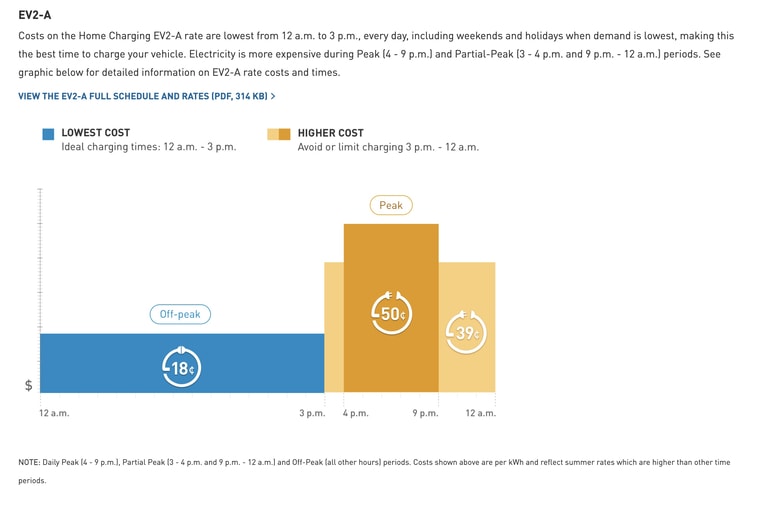 The EV2-A rate is a TOU rate structure for electric vehicle owners. This rate is optimized so that EV owners can charge their vehicles at home for an extremely low cost. Note that this TOU rate includes a part-peak rate where electricity is charged at a moderate rate between off-peak and peak hours. This rate is advantageous to solar owners that are able to shift as much electricity usage as possible to off/part-peak hours. Solar electricity sent back to the grid during peak and part-peak hours is able to buy you up to 4x the amount of electricity to be used during off peak hours!

Under the Net Energy Metering (NEM) program, you will be billed once per year via an “Annual True-Up Statement” from PG&E. This bill will outline all of your usage, solar electricity produced, and credits received over the course of the year. The billing period for the annual true up starts on the day your solar system is approved by PG&E. Below is the annual billing from GoSimpleSolar President Mark Becker’s home; his solar system offset about 65% of his electric usage, but 100% of his bill. This is “arbitrage” of the electric rates; “selling” high (by exporting solar kWh to the grid) and “buying” low (by importing PGE’s power) when rates are low. 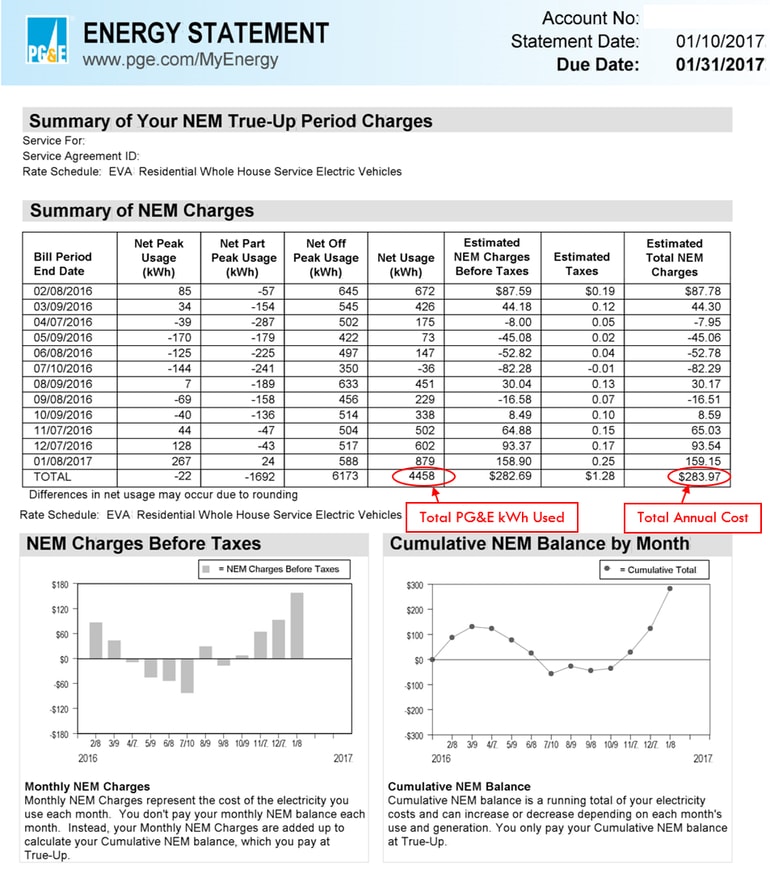 GoSimpleSolar believes that every system requires individualized design in order to meet the specific needs of each client. As a client, it is important to understand the ways that your system can be designed in order to achieve different results. GoSimpleSolar designs 100% of projects based on the following generalized models.

GoSimpleSolar is strategically positioned to be able to provide clients with a 25 year warranty that we refer to as the Sunshine Warranty. By using time-proven durable products with licensed roofing/and or solar licensed professionals installing them, GoSimpleSolar aims to ensure that your solar system is a worry-free investment. A licensed roofer/licensed solar contractor carrying out a solar installation will not void your existing roof’s warranty and should guarantee all roof penetrations for the life of the system.

SolarEdge inverters come equipped with the ability to communicate with your solar system and provide you with detailed data about production trends and up to the minute power output data. Online monitoring allows you to get extremely detailed information about your production that will allow you to make wise energy decisions at your home/business. The display below shows the “Daily View” of the internet monitoring for a typical GoSimpleSolar customer, a smartphone app is available as well. 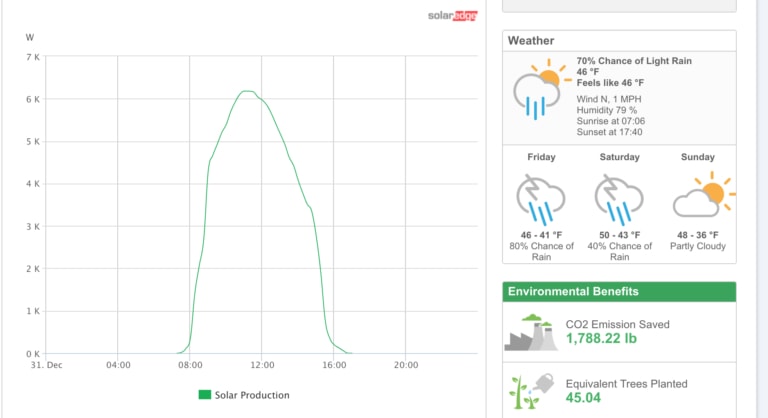 PGE.com offers a great tool for solar owners to track how their production works to offset their electricity costs over time. By detailing when your energy is getting sent back to the grid and looking at the effect of Net Energy Metering (NEM), it is very easy to track usage and reduce costs from PG&E. Check out the photo below, which details a day in the life of GoSimpleSolar President Mark Becker’s solar system. The energy that the system produces and does not get used is sent back to the grid and credited back to Mark. 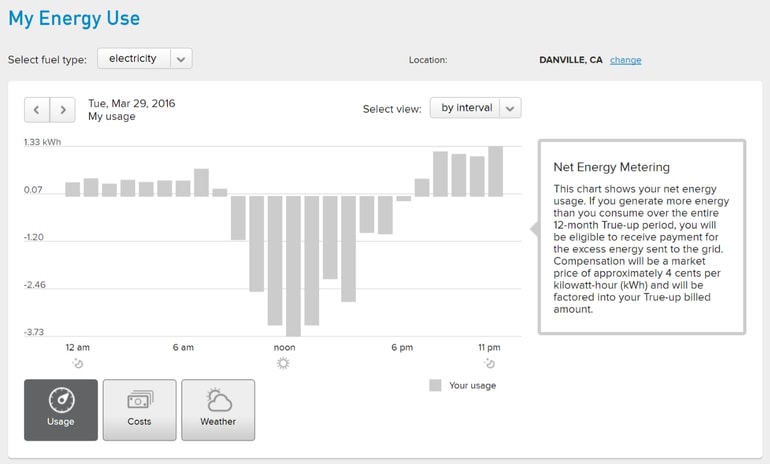